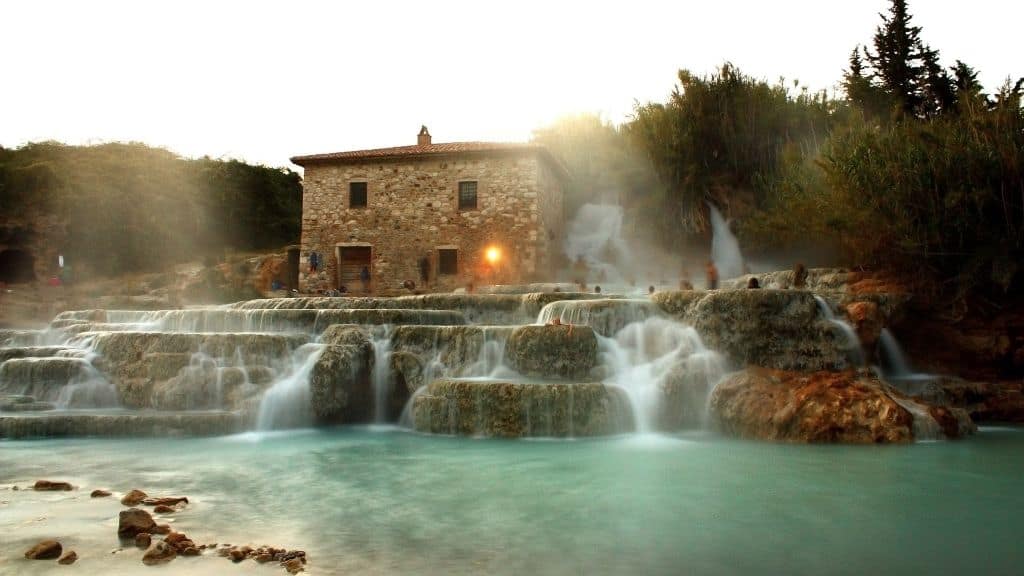 You can tell how old Saturnia is just by looking at her. The first inhabitants of the area arrived at the end of the Bronze Age, but there are ruins in the surrounding countryside that are much older, ancient enough to suggest that Saturnia was the first real city in Italy.
Yet, for a place that has seen at least 2,800 summers, Saturnia is difficult to place. Neighboring Maremmans insist that the city has sold its soul to the devil, which is why it feels empty. But given that Saturnia attracts more tourists than all the other towns in the Fiora valley put together, it is likely that behind this belief there is only a little envy. Its Etruscan, Roman, Medieval and Renaissance relics are incredible and are part of the current landscape, just like its fine restaurants. Unfortunately, many tourists never see these relics and come to Saturnia mainly because it is one of the most popular spa destinations in Italy. Here you can immerse yourself in pools with a natural temperature of 37 ° C all year round. Don’t do what most does
part of the tourists. When visiting Saturnia, don’t forget to immerse yourself in its millenary history.

Saturnia begins in Piazza Vittorio Veneto, a bright, flowery and full of life square. The best time to visit is lunchtime, when tranquility returns and even the last latecomers have followed the scent of stewed tomatoes home. In the heart of this square are the worn columns of a Roman temple. From how Saturnian children run around them playing hide and seek, it’s hard to believe these relics are over 2,000 years old. But Saturnia is so tied to its ancient past that if it were to be stripped of its antiquities to put them in a museum, it would be like stripping it of its soul. Thus, instead, tourists have the rare opportunity to touch the carefully carved faces of the Roman dead on the funerary stones and slide their fingers over the epigraphs in Piazza Vittorio Veneto.
Following via degli Aldobrandeschi out of the square, you will find a stoic-looking stone column that is losing its battle against some very insistent vines. This is the only Etruscan ruin on the left side of Saturnia, built some time after the seventh century. 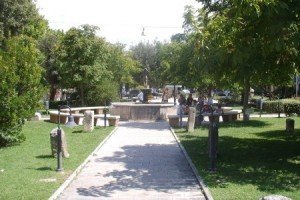 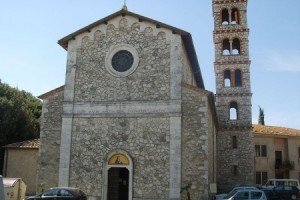 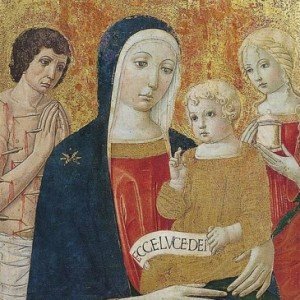 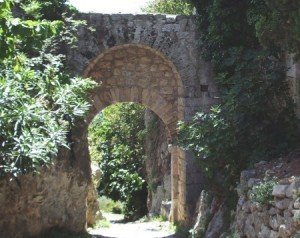 Saturnia is a delightful village in the Tuscan Maremma, we already knew its thermal waters (I must say extraordinary, after a few minutes of immersion you feel smoother skin) but only recently did we visit the village that gives its name to the spa, and it is absolutely lovely! From the central square, where there are many excellent traditional restaurants, to the alleys of the historic center, to the church of Santa Maria Maddalena and the remains of the ancient Roman columns, very interesting!

We spent a few pleasant hours walking through the narrow streets of Saturnia after treating ourselves to a day of well-being at the famous Saturnia spa. The village is really very nice and well cared for, very interesting is the Archaeological Museum where the finds found in the nearby necropolis of Puntone are exhibited. Also beautiful are the remains of the ancient city walls and the Porta Romana which stands on the ancient route of the Via Clodia …

Saturnia is a village that catches you at first glance, small but rich in history and attractions, the village is a real gem to be discovered. We were very fascinated by the remains of the ancient Roman columns, visible in Piazza Vittorio Veneto, and the layout of the surrounding walls (built in Roman times) with the adjoining Porta Romana. We ate in one of the restaurants in the center and were more than satisfied, definitely an experience to repeat!

The village of Saturnia is really very interesting, it is said to be one of the oldest in Italy and the testimonies of its past are still tangible today, from the ancient columns to the walls, of Roman origin. We visited the church and the Archaeological Museum and we gave ourselves a romantic aperitif at sunset in the central square ….

Saturnia is one of those villages that remain in your heart, the locals are welcoming and always smiling and the village for its part has a charm of the past, small and well-kept in every detail, it offers you the experience of a walk in history! We could only spend a few hours there but will definitely be back for a longer holiday!

HOW TO GET THERE

Saturnia is located in southern Tuscany, in the province of Grosseto, in the municipality of Manciano. The village of Saturnia is 57 km from Grosseto, 150 km from Rome, 200 km from Florence and 470 km from Milan.
It is possible to reach Saturnia by train, the closest railway stations are those of Montalto di Castro 45 km, Albinia 49 km and Grosseto 47 km, from the stations it is possible to continue towards Saturnia with the Tiemme buses for the Tuscany region and Cotral for Lazio. .
The nearest airport is Rome Fiumicino, about 150 km from Saturnia.
For those coming by car from the north it is recommended to follow the A1 Milano-Parma motorway, then continue on the A15 Parma-La Spezia motorway, then the A12 La Spezia-Livorno-Rosignano Marittimo-Grosseto motorway, Grosseto Est exit, follow the signs for Manciano – Montemerano – Saturnia.
For those coming from the south, on the Rome-Tarquinia motorway, Tarquinia exit, follow the signs for Montalto di Castro – Manciano – Saturnia.

Saturnia will surprise you with its traditional cuisine, from small restaurants to trattorias, for an unforgettable food and wine experience! In the central square of the town, Piazza Vittorio Veneto, you will find the Ristorante I Due Cippi, a local historian of the Tuscan village, specialized in excellent meat dishes and with a well-stocked cellar P.za V. Veneto, 26 – tel. 0564601074, also in Piazza Vittorio Veneto on Ristorante Il Melangolo, even here you can enjoy delicious meat dishes and excellent pizza, Piazza Vittorio Veneto 2 – tel. 0564 601004 – in the square there is also theOsteria Pizza in Piazza with an excellent quality / price ratio and family atmosphere. In Via Mazzini you can find the Ristorante da Mario, another historic restaurant in Saturnia, excellent grilled meat and classic dishes from the Maremma, Via Giuseppe Mazzini 18 -tel. 0564601309, the Bacco & Cerere 2.0 Restaurant with refined dishes of the Tuscan tradition revisited in a modern key, Via Giuseppe Mazzini 4 – tel. 0564601268 and the Trattoria Casa e Bottega, particularly loved for its traditional dishes, Via Mazzini 18 / C – tel. 0564601342. Just outside the town, instead, the Lo Scangeo Restaurant, where you can taste extraordinary homemade pasta, Maremma meats and classic pizzas or with special doughs Loc. La Crocina snc – tel. 0564601515 and the Ristorante La Diciannovesima Buca, with a beautiful view over the golf courses of Saturnia, offers traditional dishes of Tuscan cuisine Strata Provinciale snc – tel. 3357227208.

Saturnia plunges into an uncertain past that makes it difficult to understand its monuments. In nearby Bagno Santo, archaeologists have found remains of a sacred place believed to belong to a mythical civilization called Pelasgic, which would have arrived by sea from the Aegean islands 2000 years before Christ. It is an unproven theory, what if
ask around, the Saturnini will not show that they particularly appreciate it, since they know that their city is much older than all the others and this is enough for them. It is possible to explore the necropolis left by the first inhabitants of Saturnia, the Villanovans of the eighth century BC. C., in the nearby Carlo’s office (ask the tourist office; 0564 620532). Over time, Saturnia became one of the most beautiful and richest cities in Etruria. At the time it was called Aurinia, the “city of gold”. In 183 BC Aurinia became a prefecture of Rome and soon had more than 25,000 inhabitants: it could be said that it was the New York of the Roman Empire.

A festival dedicated to classical music, a series of concerts in the splendid setting of Piazza Vittorio Veneto, the last week of August.