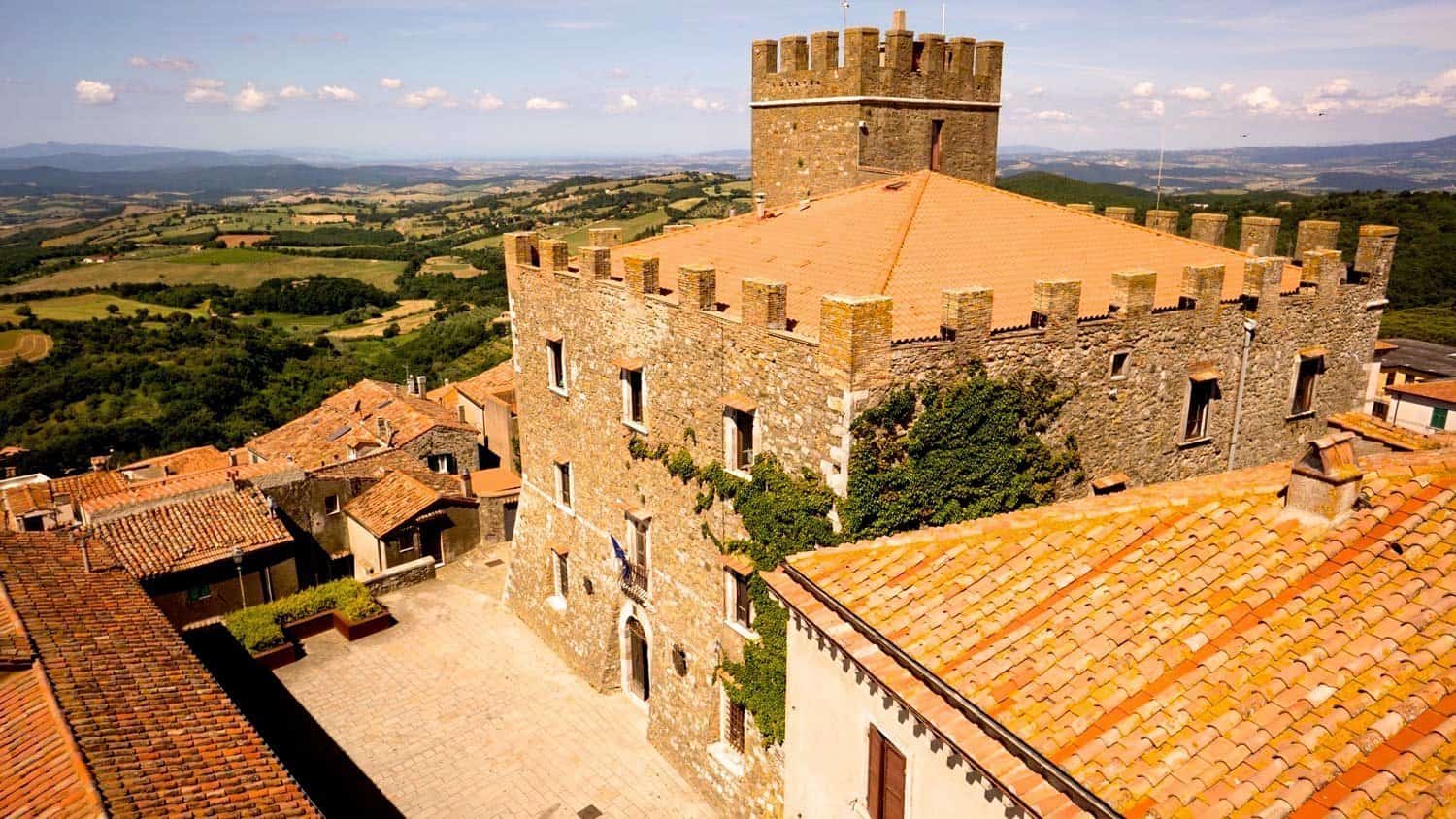 The “Spia della Maremma” from the top of the Cassero, you can admire the most beautiful panorama of Tuscany, from the Argentario sea, with the islands of the Tuscan Archipelago, to the innermost territories and the Apennines …

Apparently, Manciano is the country where you go for shopping and indulge in “modern” pastimes such as the cinema and the large supermarket.
But on closer inspection, the country has its own discreet charm. For the locals, it is the Spia della Maremma, a nickname coined for the incredible view it offers over the surrounding countryside. The hills of Manciano were shaped by the first settlements of prehistoric man, but the town has a much more modern aspect.
After malaria was eradicated, Manciano became known for its arable pastures, wheat fields and tall olive groves. Manciano has always played a leading role in the history of this area, giving all his heart and many of his men to Giuseppe Garibaldi’s campaign for Italian unification in the 19th century.
Tourist Office: piazza Magenta (0564 620532)

The historic center of Manciano begins in Piazza Garibaldi. You can reach this picturesque square by taking Via Cavour from the base of the town. Next to it there is a small garden where you can sit and enjoy an incredible view of the surrounding countryside. The statue among the pines is by the famous Maremma painter Pietro Aldi, a native of here.
The Art Nouveau fountain in the center of the square was built in 1913 to celebrate the completion of the Fiora Aqueduct. The frowning sea monsters that surround the base are dolphins, and the bas-reliefs around the barrel represent the transition from the water shortage of ancient times (the abandoned bucket) to the well-being of modern ones (the shepherd who drinks from the jet of water). running water).
Via Cavour connects the north side of piazza Garibaldi to piazza Magenta and the Cassero. The numerous renovations have preserved only a part of this 15th century fortress intact, namely the sloping base. The rest of the building is a mixture of renovations that followed one another until 1935. Admire the magnificent panorama from the terrace on the left side of the fortress: on a clear and sunny day, you can see everything, from Mount Amiata to the Argentario sea. The Cassero is now the seat of the town hall of Manciano and is closed to visitors, unless a guided tour is booked (on request; English-speaking guide available; 0564 620532; € 5). The ticket also includes admission to the Museum of Prehistory and Protohistory, to the Council Room, where you can admire some paintings by Paride Pascucci and Pietro Aldi, and to the panoramic tower, from which you can enjoy an unforgettable and boundless view of the Maremma.
Go down the steps that start from the Cassero and turn left to find Porta Fiorella, an arch dating back to the 15th century. The coat of arms above the arch, representing a rampant lion, belongs to the Aldobrandeschi. The Church of San Leonardo in via Cesare Battisti, founded in the 15th century, will attract your attention with its bright salmon-colored facade: it is dedicated to the patron saint of Manciano, San Leonardo, who is said to have been sentenced to death for a crime not committed. An angel released him and told him to run until he heard the triple toll of a bell. Locals say that the Church of San Leonardo was built at the point in Manciano where the saint heard the third toll. The exterior is modern, and inside there are two splendid works by Paride Pascucci:
The Apostles, painted in 1909, is supposed to represent Jesus washing the feet of his apostles but, in the typical Pascucci style, the men portrayed are Maremmani, with faces hardened by work in the fields and ravaged by malaria; the sombre, dark colors of the paint make bearded men appear even older and more battered. Pascucci’s second painting, on the other hand, is very bright and depicts St. Leonard kneeling in front of the Holy Family (1894).

This is one of the few museums in Italy to preserve artifacts of prehistoric civilizations. It has recently been refurbished and is a fantastic choice for the family with a special itinerary for children, who will be accompanied by the mascot “Lucy”, and a 3D model of a prehistoric hut. The visit is interactive and is done with a tablet, which will be delivered to the museum’s front office. The first room covers the Paleolithic. The Elephas antiquus teeth on display belong to a prehistoric elephant the size of a house. In the next room, it is the end of the ice age and the beginning of the Neolithic (around the sixth millennium BC for the Maremma). In this era, previously nomadic man had begun to become permanent and work the land with primitive tools and knives like those on display. Next to it is the Chalcolithic, the age in which man began to use copper and other mined minerals to make tools and ornamental objects, such as rings and buttons on display. Much of this collection comes from the tombs of the Rinaldone civilization (fourth-second millennium BC). The last room of the museum represents the Bronze Age. The ceramics on display date back to 1700 BC. C. and were used for cooking; they are the oldest found in this area. Finally, there is a room dedicated to the finds from the late Bronze Age of Scarceta (1000-900 BC): here the life of the village is reconstructed with plates, glass bead necklaces, terracotta buttons and even small animals toy. 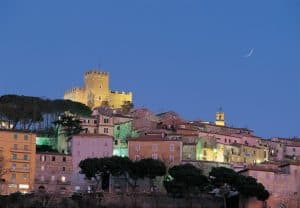 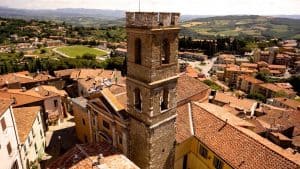 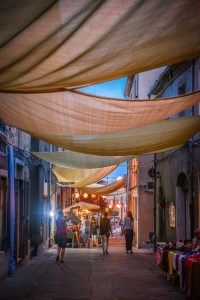 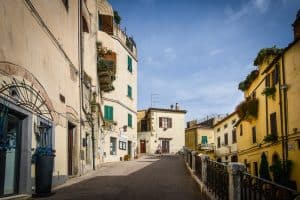 Manciano is one of the most fascinating villages of the Tuscan Maremma, perfect for spending a pleasant day walking through the alleys, admiring its splendid views – do not miss the opportunity to climb the Cassero and see the most beautiful panorama of Tuscany –

The Spy of the Maremma

There is a saying that summarizes the magic of this village “Manciano with a beautiful sign, den of thieves and spy of the Maremma”, the village is in fact located in the heart of the Maremma, which in 1800 was strongly affected by the phenomenon of banditry. From the top of its Rocca Aldobrandesca the view is breathtaking … The Church of San Leonardo and the city walls are also beautiful.

Abbiamo avuto la fortuna di visitare Manciano a fine Agosto, in occasione del Palio delle Botti, ed è stato un vero colpo di fortuna! The town was all colored with the colors of the various districts and see the challenge with the pushers who give their all to push the heavy barrel to win! Really exciting! Over the weekend we were able to visit all the most beautiful monuments of Manciano and the beautiful Cascate del Mulino di Saturnia!

The Aldobrandeschi were the most powerful and illustrious family of the Maremma. Originally Lombards, the government of the Maremma was entrusted to them by the Pope during the 9th century. They gradually moved inland to escape the raids of the Saracen pirates who infested the Tyrrhenian Sea. But they did not move alone: the family in fact brought with them thousands of homeless subjects; it was they who colonized the Fiora valley, the stronghold of the Aldobrandeschi. For 400 years, the family and their court were nomads, and they continued to move according to the seasons. In the thirteenth century the dynasty separated into two branches, the Aldobrandeschi of Sovana and those of Santa Fiora. The Sovana branch died out in a short time, while the Santa Fiora branch continued to govern for another 145 years.

HOW TO GET TO MANCIANO

Manciano is a municipality, one of the largest, in the province of Grosseto, a city from which it is 61 kilometers away, Rome is 152 kilometers, Florence 209 kilometers and Milan 491 kilometers.

How to reach Manciano by car

WHERE TO EAT IN MANCIANO

Manciano is a true paradise for gourmets and admirers of traditional Tuscan cuisine, here the recipes are authentic and typical of the past and the dishes, often revisited and with a touch of fantasy, have the same aromas and flavors of the past, there are many restaurants where you can taste the Maremma cuisine, you will be spoiled for choice! We start from the town center, on the main street there are most of the town’s restaurants, the Ristorante Il Rifugio, a delightful family-run restaurant, guided by the skilled hands of the cook who prepares traditional dishes, but revisited with a touch of imagination and panache, via Trieste – tel. 0564620029, we then continue with the Ristorante La Filanda, elegant and refined restaurant obtained from the restoration of an ancient spinning mill, mixes ancient and modern in the furnishings, the kitchen offers traditional dishes, often revisited, with great attention to the excellent products the wine cellar, via Marsala 8 – tel. 0564625156, continuing to meet the Ristorante Sadun, housed in one of the most important historic buildings in Manciano, the staff is young and bubbly and the proposals are very interesting, even the choice of wines is captivating, via Marsala 29 – tel. 0564629156, few steps, the Ristorante da Paolino, historic Mancianese restaurant, family-run, much appreciated for its excellent first courses and second courses of meat, via Marsala 41 – tel. 0564629388. We leave the historic center a little but remain in the center of Manciano, with the Pizzeria DoppioZero, much appreciated for the combinations proposed, various doughs available and a good choice of appetizers and first courses, via Circonvallazione Nord 8C – tel. 0564620439, the Pizzeria Osèe, a fixed stop in Manciano for pizza and fun lovers, often themed evenings are organized, via Circonvallazione Nord 35 – tel. 0564628300, we remain on the subject of pizza, with the Pizzeria Corimbo, a welcoming place where you can enjoy excellent pizza and delicious first courses, via dell’Imposto 7 – tel. 0564629428. We then continue with the Lanterna Blu restaurant, located at the entrance to the town for those coming from Pitigliano or Saturnia, excellent meat and fish dishes and a familiar and welcoming atmosphere, via dell’Imposta 18 – tel. 0564629068, Il Miravalle Restaurant is a real institution in Manciano, attached to the hotel, offers the most authentic Maremma cuisine, via Antonio Gramsci 42 – tel. 0564620245. Finally, the Locanda Il Poderino, located just outside Manciano along the road that leads to the sea, the inn offers a varied menu of traditional Maremma dishes, and a breathtaking view of the village of Manciano.

WHERE TO STAY IN MANCIANO

The Festa delle Cantine celebrates the two greatest passions of every Manchiano: good food and wine. For three evenings the cellars of the historic center are open to the public and endless glasses of wine are offered with both hands, accompanied by generous portions of ciaffagnoni (Mancianese version of savory crepes), fried pizzas, bruschetta and other local dishes. The wine served at the party comes from some of the best known wineries in the region.

Traditional appointment with the Palio delle Botti, a competition during which the six city districts compete against each other: Borgo, Cassero, Fonti, Imposta, Monumento and Mulinello. Two important challenges, that of the Pink Trophy, with the women’s palio and that of the traditional palio, with the men’s teams … If you are in the area, you absolutely cannot miss it!

Fun and special festival dedicated to music, a fun weekend between traveling bands and groups of percussionists, organized by the cultural music association D. Chiti of Manciano, a unique event!