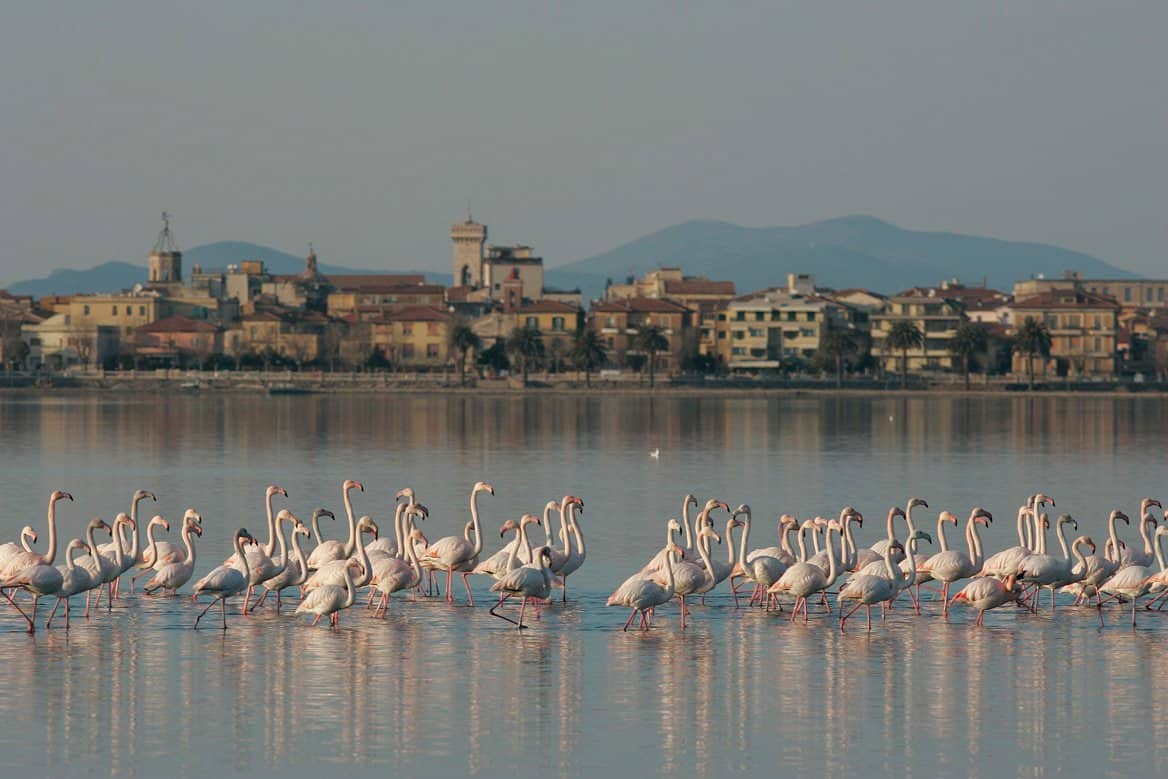 Orbetello is a lively city built between the shores of the lagoon to which it gives its name.

With a breathtaking view of the coast of Monte Argentario, and palm trees as far as the eye can see, Orbetello is one of the most fascinating villages in the Maremma

The settlement dates back to the eighth century BC. C. In the following centuries it was a landing place for ships carrying treasures from ancient Egypt and Africa, while in more modern times, between the 15th and 16th centuries, it became an easy target for pirates: for this reason, in Orbetello little remains of what must have been a rich Etruscan and Roman heritage. The people of Orbetello seem to live in two distinct worlds: the streets and squares inside the town are very chic, dotted with Renaissance relics and suffused with timeless grandeur, thanks to the riches brought here over time by thousands of ships; its external streets are wild and natural, bordered by palm trees, gardens perfect for a picnic and protected parks. In the evening, the best place to go is the Orbetello lagoon, as the sun sets behind Monte Argentario and nocturnal animals make their appearance. The first fishmongers in Orbetello date back to the 15th century, and today the lagoon remains famous for two gastronomic delights: bottarga and smoked eel.

The visit of Orbetello starts from the Porta del Soccorso, Porta Nuova and Porta a Terra, three arches that guard the city. Restored in the 17th century, their facades in typical Spanish Baroque style are topped with various coats of arms. The statue of San Biagio, protector of the city, stands above them.
Follow viale Mura di Levante along the faded white facade of the Guzman powder magazine; built in 1692, this building was a factory and warehouse for explosives, one of the cornerstones of the city’s economy. Today it houses the Archaeological Museum of Orbetello (Via Mura di Levante 11; January-March: Saturday: 14: 30-17: 30 / April-June and September: Saturday: 16: 00-19: 00, Sunday: 10:00 -13: 00 and 16: 00-19: 00 / July-August: Friday, Saturday, Sunday: 18: 00-22: 00 / rest of the year: Saturday: 14: 30-19: 30, Sunday: 10: 00-13: 00; 0564 860378; free). On the first floor, the Roman and Etruscan era relive thanks to the Pediment of Talamone and to
other richly decorated votive pieces. The Etruscans loved banquets and, unlike the ancient Greeks, they also admitted women to meals, enjoying aromatic wines and game scented with incense that burned in the thymiaterion, similar to what is on display in this museum.
The main street of Orbetello, Corso Italia, shows hints of old-fashioned luxury with its richly painted houses and exclusive shops. Halfway along the street is the magnificent Palazzo dei Governanti with its 16th century clock tower.
Turn right into Piazza della Repubblica to visit the Dome of Orbetello, dedicated to the Assumption of Mary, which is believed to have been built on the ruins of a pre-existing pagan temple in 1201. The rose window is framed by sculptures representing local saints and leaders. Inside, the chapel of San Biagio, added in the seventeenth century, houses the head of San Biagio in a precious reliquary in the shape of an embossed silver bust. The bust is placed on a medieval marble altar of rare beauty. Most of the walls of the cathedral are deliberately kept bare to enhance the evocative frescoes of the nineteenth and twentieth centuries that adorn the dome above the main altar.

In the war between France and Spain in the sixteenth century, the Republic of Siena chose to take the wrong side and lost dominion over the Maremma, which passed to the Medici. The Medici ceded the Argentario coast to the Kingdom of Spain, which established the vassal state of the Presidi, with its capital in Orbetello; Spanish culture, food and traditions thus spread throughout the promontory from here. The Spaniards also built the numerous towers still visible today, to protect against the Turkish pirate Kahyr-ad-Din, known as Barbarossa, and his progeny, who would frequently try to invade the Argentario coast, capturing the inhabitants to sell them. as slaves in markets in Istanbul and Africa.

THE FRONT OF TALAMONE

The Pediment of Talamone is a terracotta bas-relief depicting the ancient Greek myth of
Seven against Thebes, which tells the dramatic climax of the war between Eteocles and Polynice, sons of Oedipus and Jocasta. It is one of the few remaining examples of Etruscan-Hellenic art (2nd century BC) and is kept in the Archaeological Museum of Orbetello (page 125). The sculpted figures are intensely expressive, like that of Oedipus blind between the bodies of his dead children and of Anfiarao sinking into Hades.

IN THE SURROUNDINGS OF ORBETELLO

The Orbetello lagoon is the only marine lagoon in the world to be perpendicular and not parallel to the sea. Geographical wonders aside, it is a great place to visit in the summer season, when you can go on excursions by boat or on foot. From its banks you can see the Spanish mill, one of the nine windmills built by the Sienese: in the sixteenth century the fishermen of Orbetello transported the Maremma wheat to be ground by boat. The Orbetello lagoon is also a WWF oasis and is home to more than 450 species of birds.

This museum is dedicated to the rural transformation of southern Maremma in the 20th century. Divided chronologically into three rooms, its collection of paintings, tools, photographs and maps showcases the social history of a turbulent period of land struggles, sharecropping, malaria and chronic food shortages.

Cosa is perhaps not the richest archaeological site in the Maremma, but given that it is free to enter, it is worth taking a look.
The settlement was founded in 273 BC. C., and developed into a thriving agricultural and urban center, but was destroyed in 70 BC. C. during a battle between Romans and pirates. The city rose again, but never returned to its former prestige. Today, most of it is still underground. The Cosa Museum (€ 2) has a small collection of votive objects, vases, and other Etruscan and Roman artifacts, but the best pieces are
been taken elsewhere. Near the museum there are tiles from the Republican age with their typical white and geometric designs. Take the path that leads to the most interesting part of the site, the arx or citadel. The largest building overlooking the Orbetello lagoon was the Capitolium, a temple built around 150 BC. C. and used for ceremonies.
Alongside, in the templum augurale, burnt sacrificial remains were found. It is thought that the smaller temple was dedicated to a goddess of the sea and fertility known to the Romans as Mater Matuta. To the other
ends of What you can see the ruins of a basilica from 150 BC. C., on whose ruins a small Byzantine church was built in the 6th century.

Orbetello is famous for two Maremma specialties: marinated eel and bottarga. Brought by the Spaniards in the 16th century, marinated eel was traditionally served with an acid sauce known as escabeche, but the Orbetellans prefer it topped with vinegar, garlic, chilli and rosemary. Today it is possible to buy eel in any shop selling typical products, but to be made in a workmanlike manner it must be fried for a few seconds and then seasoned with a drizzle of olive oil.
Bottarga is actually made up of mullet eggs. The history of this delicacy dates back to when the city council used to pay fishermen for unwanted parts of the fish. Even though it is sometimes referred to as “poor man’s caviar”, it is actually a decent value and quite expensive food. The best is the hand-made one, which can be recognized by the dark amber color. Traditionally, bottarga is served on thin slices of warm bread with a drizzle of lemon juice or as a condiment on pasta.

Gustatus, which means “the sense of taste” in Latin, is a five-day gastronomic festival in which local restaurateurs, farmers and wine producers come together to celebrate peasant and lagoon cuisine; among other things, you can taste the famous spaghetti with bottarga.